Meanwhile, New Waterford's Gillian Head takes a slightly different approach with her second recording, "Tidal." While there are a number of great dance groups on the CD, she's pushed the envelope somewhat in places, including tunes from Daniel Lapp, John Doyle and Martin Green (all well-known from Celtic Colours over the years).

This is not the simple, basic stuff. This is the twisty-turny stuff, tunes that get your attention and then makes you wonder just where it goes from here. It's a challenge but Gillian is up to it, even through Gamma Ray, a slice of Celtic jazz from the piano of Jason Roach. Jason and guitarist Mary Beth Carthy provide most of the backup but they are also joined by Colin Grant and Donnie Calabrese in several spots.

There are a number of cuts that got my attention, including "Gamma Ray." It's different, but well done, certainly more of a concert piece than something for a dance hall. "Jigzilla" and "The Last Set" are in there as well, lively and close to the floor.

Piping It In by Jack Baker (Irish American News, August 2018)

"A couple of years ago I had the distinct pleasure to review the first album by Gillian Head, one of the finest fiddlers to come from Nova Scotia in a long time.  This last month I had the joy to receive Gillian's latest release "tidal" and boy-oh-brother it is so alive and powerful, flat out fun fiddling that there is no way you can keep from falling in love with it.  Joined by Jason Roach, as fine as piano player as I've ever heard, Gillian sails to new heights, taking chances, playing with fire and imagination and grace.  She does some of the late Jerry Holland's music, he was her teacher and would be mightly proud that the seeds he planted have grown into this dynamo.  She also does tunes by Liz Carroll and a goodly number of original tunes that will leave you awestruck by her immense talent.  I sincerely hope some of the performances venues in this area start dragging this powerhouse fiddler down from Nova Scotia to grace Midwestern stages.  This is a young musician to keep your eye on, and your ears open to, don't get much better." 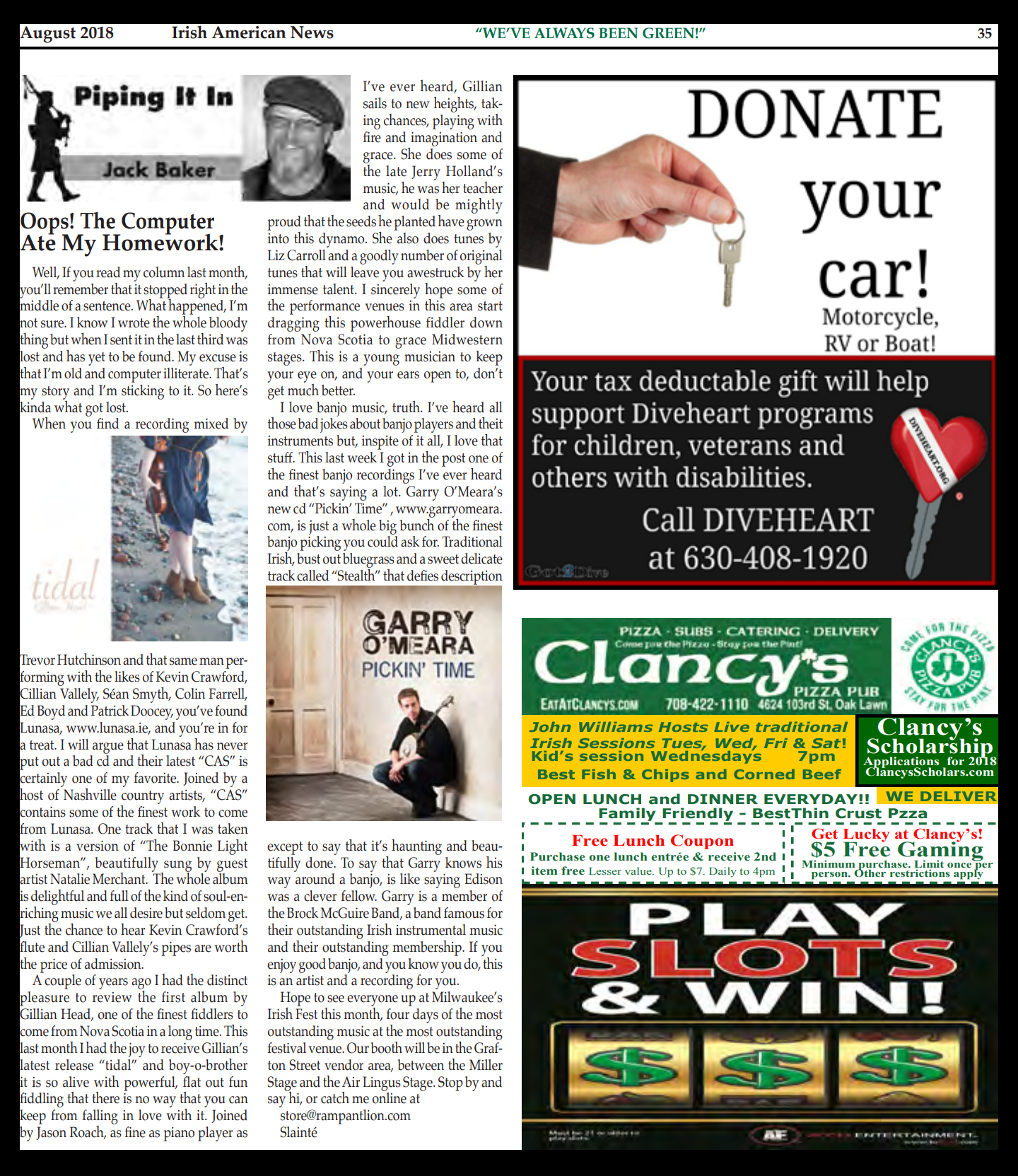 This young fiddler from Cape Breton Island is a former pupil of the late great Jerry Holland, and has a taste for the traditional as well as a good helping of quirky modern tunes.

Marches, reels and strathspeys by Marshall, Skinner and Mackintosh sit among a rake of Jerry Holland tunes and a number of anonymous classics. There's a fair dollop of Irish here too.  Spootiskerry, The Banshee and Anne Lacey open proceedings, followed by a pair of old Scottish jigs sandwiched between compositions from Jerry Holland and Liz Kane. Jigs and clogs, strathspeys and reels, plus two slow airs - Liz Carroll's Island Of Woods, and Lonesome Eyes, another of Jerry's great melodies.

Gillian's fiddle style is vigorous, aggressive even, not as polished or finessed as many Nova Scotian players, but full of energy and drive. There's an element of rock'n'roll, reinforced by the strong backing on guitar, piano and drums. Ryan J MacNeil's whistle is the only extra melody: Ms Head carries the tune throughout, with no hesitation. She employs a more delicate tone on the slow airs, but shuns a pretty-pretty approach.  Spirit is at its best when the keys are vamping and the drums are thumping. The CD peaks on an impressively powerful MSR set starting with The Duke Of Fife's Welcome, and Gillian puts a lot of elbow grease into Ross Ainslie's Taybank Shenanigans and the final trio of Jerry-style jigs. Play it loud, and put your dancing shoes on!

Starting as a stepdancer, Gillian Head took up the fiddle at the age of 9, then studying for years under the direction of the late master fiddler Jerry Holland. Eventually she has released her debut album, "Spirit". Ah, the title says it so well. Gillian has absorped the roots music of her native Cape Breton Island, which itself sprung up from traditional Scottish and Irish music. She has paid close attention to the styles of contemporary fiddlers to devise a particular style of her own. Her fiddling is powerful and passionate; her backing consists of Jason Roach on piano, David MacIsaac on guitar, Ryan J. MacNeil on whistle and Steven Wilton on drums. "Spirit" features a mix of both old and new songs, from both the old and the new world: A Cape Breton tune, a Scottish tune, and an Irish Tune walk into a bar ... Canadian's John Morris Rankin and Jerry Holland rub shoulders with contemporary Irish-American fidddler/composer Liz Carroll and Scottish fiddle patriarchs William Marshall and Scott Skinner. Jerry Holland tunes are prominantly featured on this disc, as is Rannie MacLellan's tribute to Jerry's VW Truck.
© Walkin' T:-)M

Piping It In by Jack Baker (Irish American News, May 2015)

"Another CD that showed up in my mailbox was from Nova Scotia, containing the music of Gillian Head, www.gillian-head.com, titled "Spirit".  Aptly titled, this CD grabbed and held my attention.  Gillian plays fiddle and has a backing group that really knows how to highlight her artistry.  The group consists of Jason Roach on piano, David MacIsaac on guitar, Ryan J. MacNeil on whistle and Steven Wilton on drums.  A student of the late master fiddler Jerry Holland, Gillian would certainly make her teacher proud with the masterful performance she gives here.  Not just another Cape Breton fiddler, Gillian has blended other styles along with the Cape Breton sound and has crafted a sound the is uniquely her own.  I spent one whole day in the store just listening to this CD repeat, and it was a totally new sound, innovative, complex and completely lovely.  I look forward to being able to see Gillian perform in person but in the meantime I'm going to give her CD a workout."

Excerpt from article.  Scan of article is below.

I want to highlight a pair of young fiddlers who have recently released their first CDs, Kristen Shaw and Gillian Head. The former grew up in Margaree Valley, the latter in New Waterford, and both have been playing for the past few years.

Shaw teamed up with well-known pianist Hilda Chiasson, an experienced hand at both studio and stage work, and she is also joined by her father, fiddler Kelly Shaw, on at least one cut. She has a distinctive sound with a nice swing to her music particularly on the strathspeys and reels.

Much of the music on the self-titled CD is well-known traditional material but she does include a cross-section of newer tunes, mainly from local composers spread across all 10 cuts.

Head’s CD "Spirit" is also bright and lively, featuring a good variety of tunes and arrangements. She’s someone who has an interestingly mixed heritage — her great-grandfather was Tom Marsh (a well-known fiddler in his day), while her grandfather is William (Bull) Marsh, a noted labour leader. Head is joined by Jason Roach on piano, David MacIsaac on guitar, Ryan J. MacNeil on whistle and Steven Wilton on drums.

Both young women have done well with their first recording efforts. They are young and it shows in a few spots but both recordings have a lot to offer.

Shaw’s opening cut, "In Memory of Johnny Tompkins," is a real barn burner and I particularly enjoy Head’s version of "Lonesome Eyes," a lovely air written by her former teacher, the late Jerry Holland.

In both cases the recording were done by Mike Shepherd at Lakewind Sound Studios in Point Aconi. Look for these CDs, as I expect that you will be hearing a lot from both fiddlers in the years to come.

Nova Scotia has long been a hot-bed of Celtic fiddling, with new generations of four-stringers standing atop the shoulders of their predecessors. Twenty-something Gillian Head takes a place in those ranks with her 11-track debut recording, Spirit. From the opening salvo of Sputnikskerry to the closing chorus of Willie’s Mom in Donegal, listeners are taken on a timeless trip through Cape Breton’s rich musical heritage, and by turn, those of Scotland and Ireland. A solid and spunky selection of jigs, reels and ballads showcase her finesse on the frets – lively and loose atop a tight quartet of guitar, piano, drums and whistle. Ideal for Friday nights in the family parlour or kitchen, Spirit is sure to keep your hands clapping and your toes tapping. 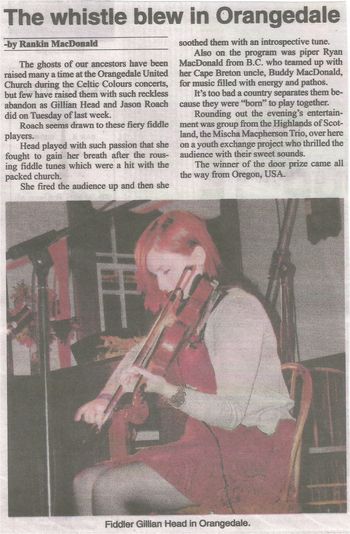 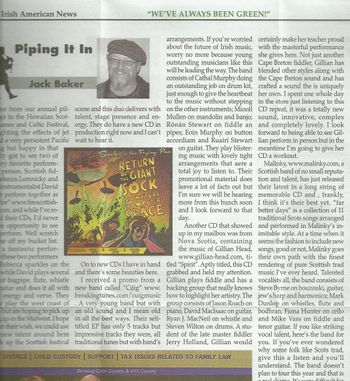